MSRA - Microsoft Research Asia (2012)
Overview
Polyglotto is a concept born from a research about children growing in multicultural environment. Children have the big opportunity to learn from each other about language and culture, but often, since they are are immersed very young in this environment, they are not aware of it.
Through this project we want to promote cultural exchanges through playful dialogues. Language diversity, instead of being an obstacle in a conversation, became the enabler for a playful cultural exchange. Polyglotto is a word guessing game that support children in sharing their native language using their natural attitude in communicate through body gesture.
Normally word guessing games are played with “cards upside down”, not to reveal to the others what they have to guess. In this case, playing with the fact that people speak different languages, the words are not a secret. Our tool will say loud a word (let’s say a Swedish word) that everybody can hear, the ones that understand the word (in Swedish) will act out for the others, to help them guess.
The main purpose of the game is not learning another language (even if that can happen) but mainly rise awareness of different languages and cultures. 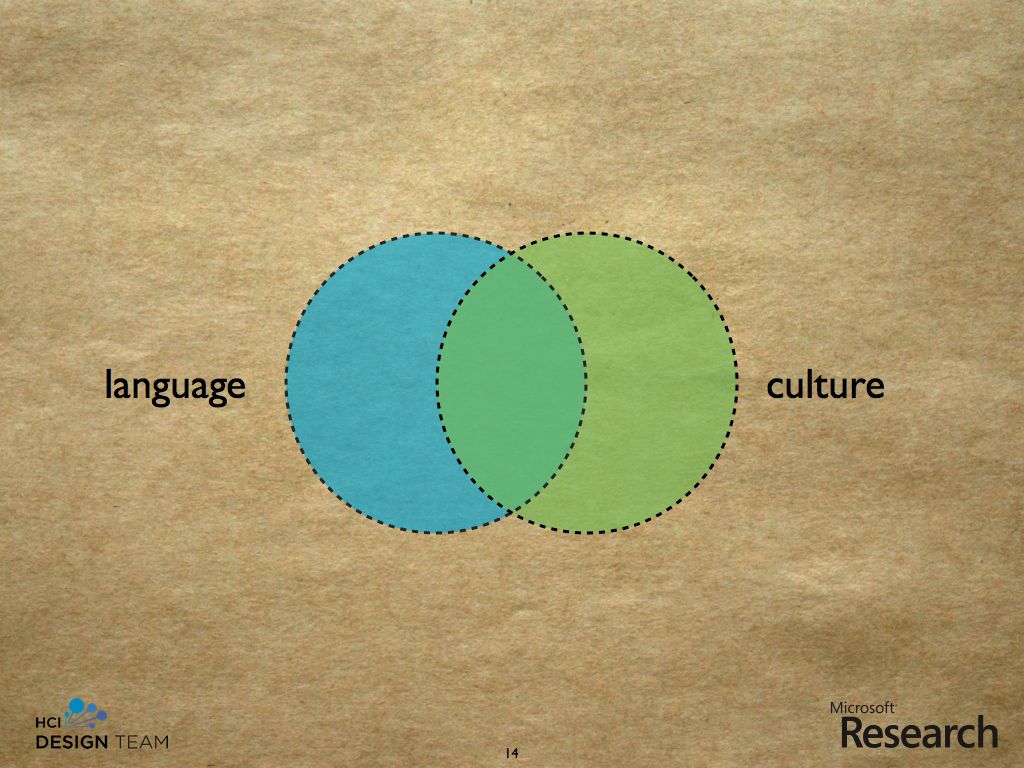 The first user centered design project at MSRA
To develop this project a user centered design approach was adopted: we started the project looking to a specific scenario and from people needs.
From the beginning we thought that MSRA and Beijing is the perfect environment to develop this project: we could explore Microsoft technology while being immersed in a rapidly changing and growing country, where the number of multicultural families will continue to grow. We decided to focus on children for two main reasons: they are the one that are more immerse in the social environment, the immersion in this environment will deeply shape their identity. In our process users have been involved in the different phases of the project, this is what make our solution closely related to the findings and the design opportunities we discovered on the route.
Children growing in multicultural environment face the challenge to integrate with people coming from different country. One of the questions that raised from our research was how to promote a sense of belonging without deleting the diversity. A big opportunity is given by the fact that many of those children speak one language at home that is not the one shared at school. 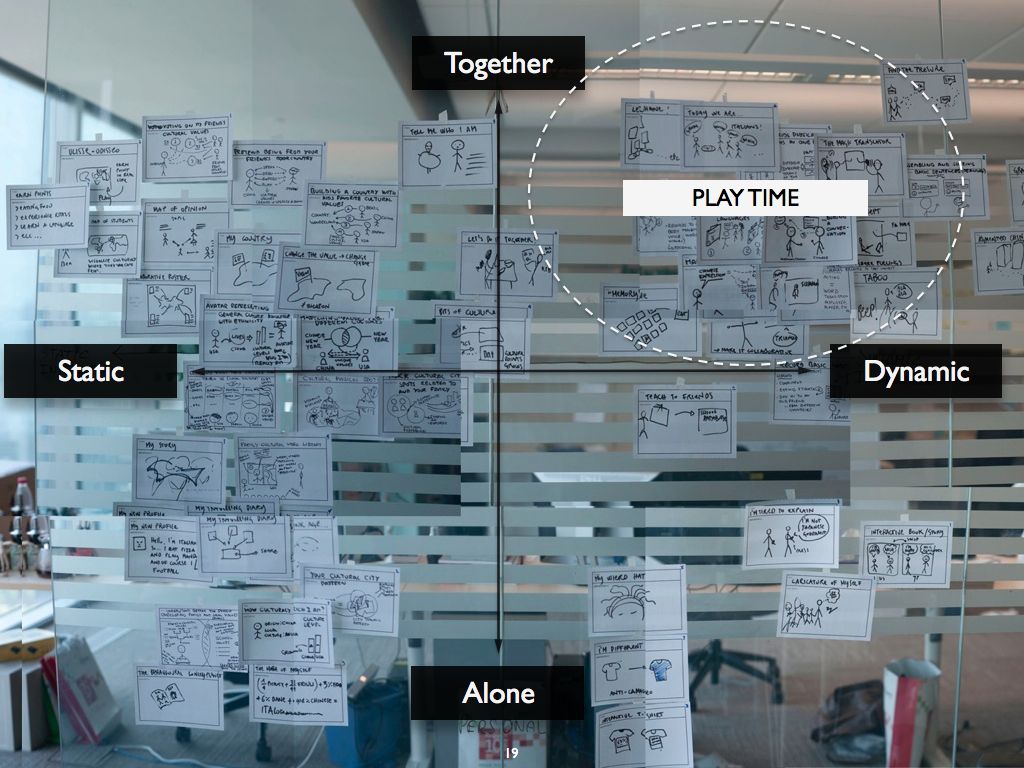 Use the natural attitude of kids to play
Polyglotto create an experience for children without being disruptive. It follows children in their routine and natural attitude. It’s a group game that enhances integration and promotes collaboration between the class members.Something that came out during the testing session is that in international schools, this game can be a supporting tool for teachers. One of their goals is to promote mother tongue language, but they don’t have any tool to help them, and they see in Polyglotto a solution for that.Possibly Polyglotto could be a support for integration in other scenarios: for example in those areas where waves of immigration are the effect of poverty and wars. In context which integration can be even harder to handle, teacher can utilize this game to face the problem in a playful way. 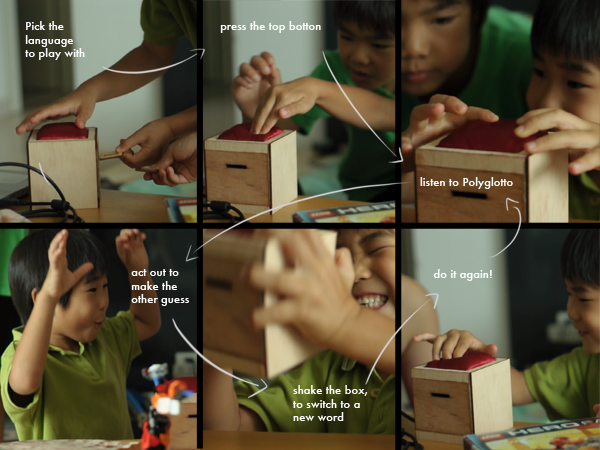 The gameplay
Polyglotto has to serve a young target that will play with it in group activity: it’s a toy that works through very simple and explicit interactions. Children can pick the language they want to play with inserting the corresponding token in the toy. To listen to the word proposed they only need to press the top button, and Polyglotto will speak. When they want to skip to a new word they can shake the toy: the token mentioned before became the tangible feedback that they are mixing the words inside it.This project is an exploration: more effort was put in understanding the key point of the interaction than concentrating in the finishing of materials.Polyglotto uses verbal communication and not written language because bilingual children at this age, often can speak their native language, but not always they can write it. This was not a negative constrain since we could count on the support of the speech recognition research happening in MSRA. 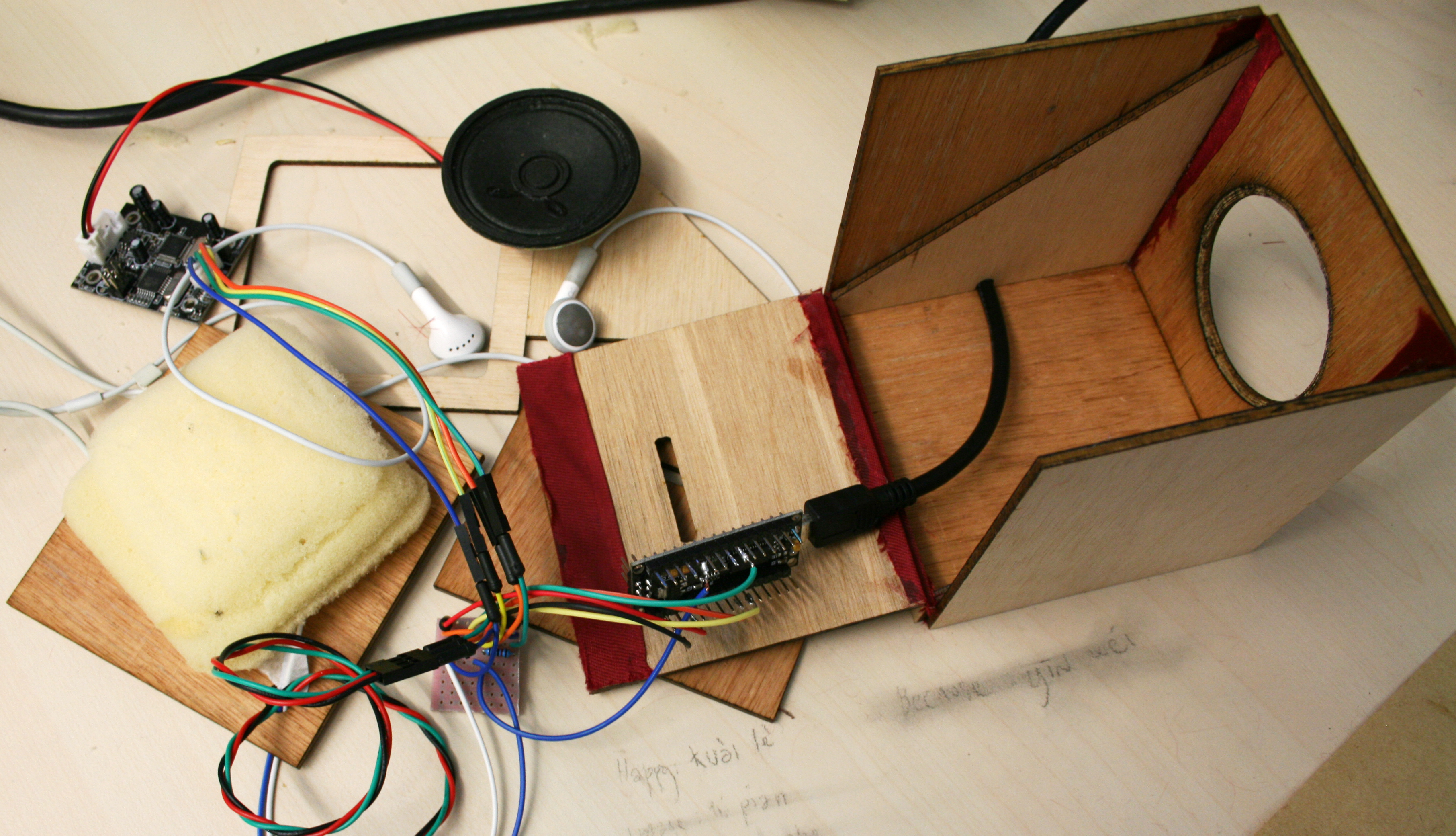